The store will not work correctly in the case when cookies are disabled.
We use cookies to give you the best experience. By accepting, you agree to our use of cookies. Please review our policy for more details.

Get the look: retro interior decor

In design terms, ‘vintage’ is not the same as ‘retro’. And as an umbrella term for several throwback style types, often ‘retro’ is not the same as ‘retro’. With all these different style types mashed up together, little wonder it’s so tough to pin down a cohesive retro style in your home. In this article we’ll break down the top retro design types – mid-century modern, sixties, and seventies – and highlight the key features and retro furnishings of each. You’ll be rocking a retro interior in no time!


Mid-century style has been storming the style files for several years now, and the reign of spindly-legged furniture looks set to continue long after Mad Men is forgotten.


Clean lines and an uncluttered look are defining attributes of a mid-century interior, so clear down your work surfaces and consign knick-knacks and novelty items to another room. With a pared-down interior, it’s furniture, fabrics and lighting that will denote the trend. Channel the aesthetic with retro furniture in teak or medium-wood tones, making sure they have the iconic mid-century raised, tapered legs.


For prints, geometric graphics in muted, organic hues are best, though bold patterns are fine. Lighting should ideally have a lot of white space around it, all the better for a dramatic statement lampshade, or industrial-style chandelier. Blinds should be in a neutral colour, and the venetian style without tapes


Mid-century modern works beautifully with another supernova design style, the Scandi interior, making it easy to dovetail into a slow transition between these two looks. 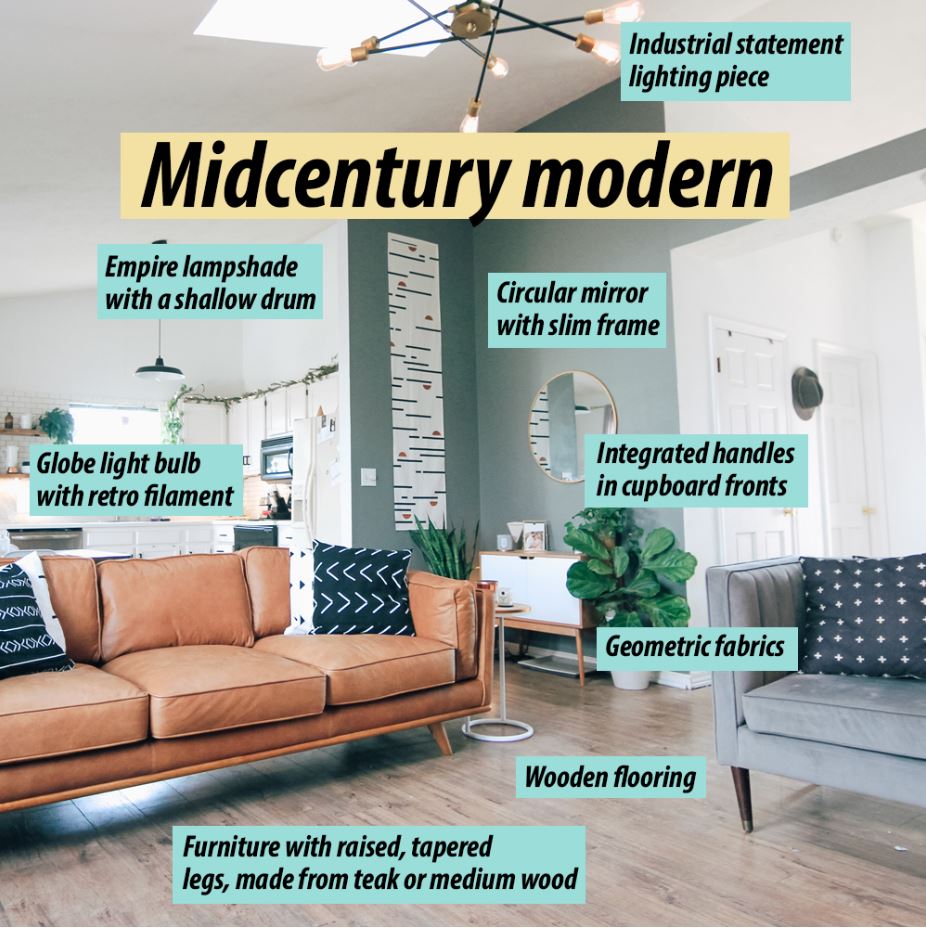 
Release your home’s free-flowing inner hippy with an injection of style from the sixties. As peace-seekers tucked flower stems into shotguns, the decor world embraced floral motifs on every surface, and took inspiration from earthy shades, pumped up to the max on psychedelic prints.


Get the sixties look with overlapping busy florals and paisley prints, anywhere you can fit them. Psychedelic brights in mismatched colours were a standard part of the backdrop in a sixties home, as were broad swathes of primary colours across furnishings.


Pine wood was widely used in homes as flat-pack furniture took grip over the nation, and untreated wood became acceptable, too. Tapered legs on furniture retained popularity from the previous era. But not all furniture was wooden - new advancements paved the way for plastic and PVC furnishings, such as the iconic Panton chair.


Accessorise with shag rugs, pop art and bongo drums – all elements of the essential ’60s living room. Interiors should turn away from minimalism in favour of frivolous accessories and mismatched collections, making this the perfect style to let loose your inner hoarder. 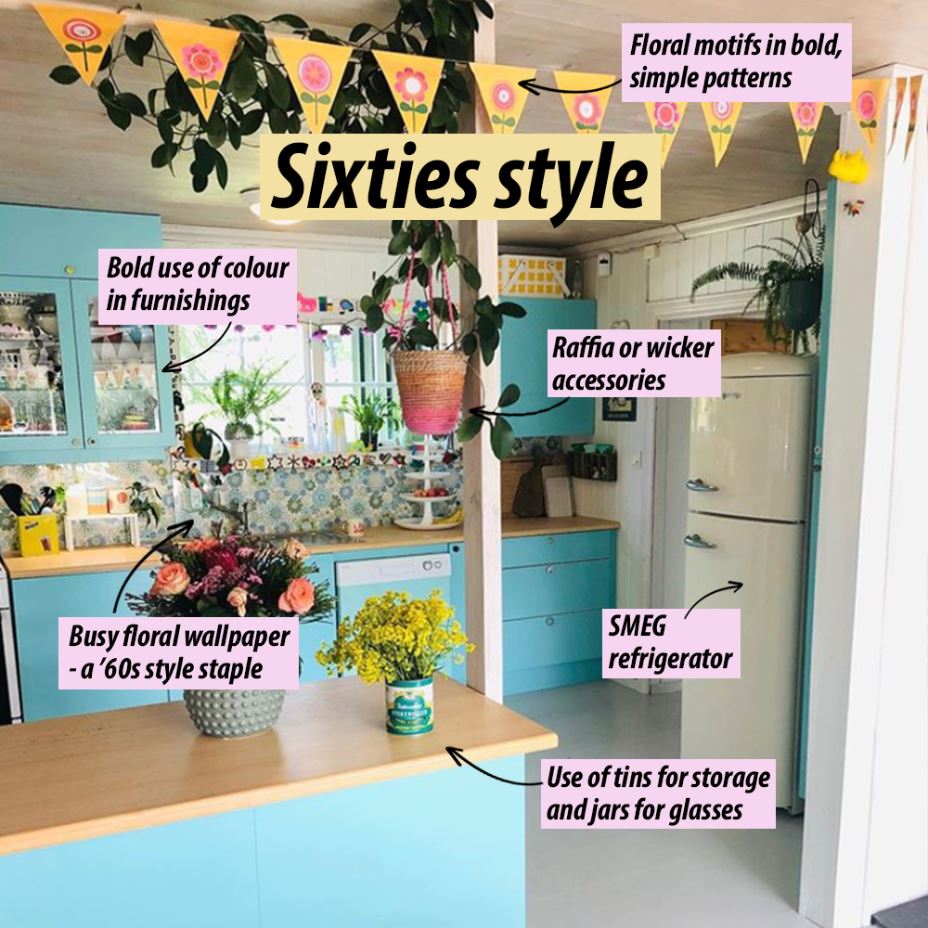 
Wallpaper took on a life of its own in the seventies, with wow-factor patterns taking walls from backdrop to centre stage. Burnt orange, brown and white, with avocado accents, was the palette of the decade, these autumnal tones taking over from the psychedelic brights of the previous era. Where previously prints would be a large supergraphic or mural, designers moved towards smaller repeating motifs, such as is echoed in Orla Kiely’s popular prints.


With crafts back in fashion macrame, embroidery, crochet and weaving all had a place in the seventies home, so try your hand at woven wall art or make a hanging planter centrepiece to truly get into the groove.


While vinyl accessories remained as a hangover from the sixties, there was a definite move back to organic materials. Glass coffee tables (preferably smoked), Brabantia kitchenware, Pet Rocks and mirror tiles all had a place in the seventies home. 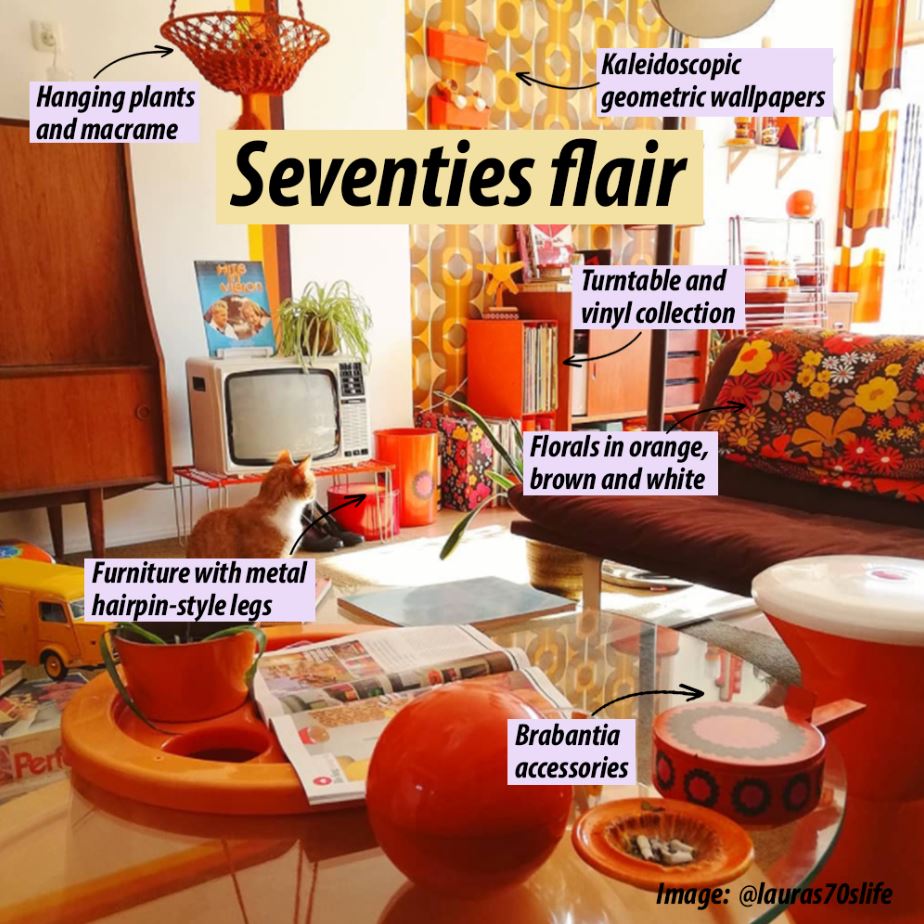 Mid-century modern, sixties and seventies: three top retro styles, each with a highly distinctive character. Which one would you choose for your home?